Join Date: May 2014
Location: Maryland's Eastern Shore, USA
Posts: 895
Mentioned: 64 Post(s)
Tagged: 0 Thread(s)
Quoted: 157 Post(s)
Garage
(Thread Starter)
Well I did it.
Yesterday was a good riding day for January, mid-60's here on Maryland's Eastern Shore. I rode 90 miles to Crofton, between Washington DC and Baltimore, and put down the kickstand on Dorothy for the last time. I traded it in for a brand-new 2018 Gold Wing Tour DCT. The new motorcycle is fantastic; I'm not going to extol its multiple virtues here. You know that bike.
Over the past five-and-a-half years, that CTX did everything that I needed it to do, and many, many things I would never expect *any* motorcycle to do. I rode that bike from coast-to-coast, in every conceivable environment from city streets to Moab. That motorcycle saved me and my soul on countless occasions, and I loved it dearly.
So why did I trade it in?
There's a children's book titled "If You Give A Mouse A Cookie" that pretty perfectly sums it up. If you give a mouse a cookie (according to the story), he's going to want a glass of milk. And if you give him a glass of milk, he's going to want a straw to drink it. The story describes a slippery slope of complexity that builds and builds with each "little" thing that the mouse wants. This is what was happening to my CTX.
I wanted to install heated grips, but a few years ago a mouse literally built a nest in my top shroud. (I know, right?) While he was there, making his cozy winter home, he also nibbled on the wires that were set aside for installing factory heated grips. At the time, I just told the motorcycle shop to tape the wires up because HEY, who really needs heated grips anyway, right? Well a few weeks ago, after a pretty chilly ride, I decided that heated grips would make my life happier so I at first thought about sending it back to the shop, having them take it apart again and replace the wires, then doing the install of the heated grips.
Sounds simple, right?
Well, it's not that simple.
Remember our old friend, The Broken Tab?
Well, my "fix" for that involves zip ties and Super Glue, which totally worked by the way, but it means that I have to excavate a very thin line of glue between the side cover and the top dash cover. Again. And boy howdy, is that ever NO FUN. Not to mention that I'm not sure I would be able to get it back together without it looking like what it was: A horrible, no-good, Very Bad Thing.
Easy fix, right? Just order a new side cover! They're only (checks eBay) either horribly expensive or just not available. And if I buy a new, Honda OEM part? It's going to be a slightly different shade of red that I will either have to accept, or I'm in for a full-on color-matched paint job.
And so with some trepidation, I ordered a pair of those heated grip covers, thinking no problem, I'll just plug those into my Battery Tender terminal and be good to go! Almost a hundred bucks, but they got great reviews, so I got them. When they came in, they didn't have an SAE attachment, it's some kind of wonky proprietary-looking thing that attaches directly to the battery. Which is under that cover with the broken tab.
Sigh.
There's also the right saddlebag issue. After opening and closing the latch nearly every day for years, it's developing a nasty habit of not latching all the way and I lost a favorite baseball cap that way. Sure, I can replace the hardware for the price of a new kidney, but I could also just attach a hardware store latch that would do the same thing or howbout a bungee or velcro strap? Something that Jed Clampett would approve of.
While we're on about saddlebags, a few months after I bought Dorothy, I closed that same right bag with my helmet lock hanging out and broke off a quarter-sized piece of plastic from the bottom of the bag door. That's not getting fixed, ever.
Before I end what has turned into an unintentional rant, just let me say that all the problems I've experienced with the CTX have been made by human error, either mine or that first Einstein at the original Honda shop that assembled the bike and snapped off that @##$!# tab. Also me for not getting it properly fixed half-a-decade ago.
I paid $18,000 for it.
It was worth every single penny of that, and more.
Now on to new adventures!
Stlburd2, bigdaddy2036, Stirling and 5 others like this.
Not all those who wander are lost.

Five and a half years is actually a long time to keep a bike. I've only ever kept a few that long. My second CTX1300 is one of them. If you keep a bike much longer than that, you might form an emotional attachment that will make it hard to ever let the thing go. I know folks with twenty-year-old bikes that just sit in the garage.

The new Gold Wing is a great choice. Let us know if you find any good Gold Wing forums. I looked at a few a couple of years ago and they were not very helpful.
shane and HansenCTX like this.
Ken Smith
London, Kentucky
2019 Yamaha NIKEN GT
2018 Honda Gold Wing DCT
2014 Honda CTX1300 Deluxe
TennesseeSmith is online now
Quote
post #3 of 18 Old Yesterday, 09:34 AM
Shrek
Junior Member

BTW - Is that your new Wing? The blue trike one behind Dorothy? Nice!

Yep, that lone state of Maine is where I owned my first mc.
bob is online now
Quote
post #5 of 18 Old Yesterday, 02:31 PM
Springer
Senior Member 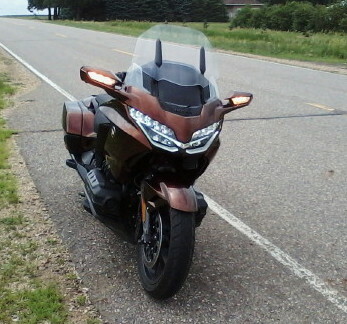 And put some dryer sheets under the pillion area of your seat. Ask me why?

BTW - Is that your new Wing? The blue trike one behind Dorothy? Nice!

Second: That blue trike actually looked pretty interesting, but it was a little bit beat up. It, along with the brown Wing just on the other side of it, were rental units that the dealership had parked out front. There was only one GW Tour bike available for purchase that day, with two of them inside with "sold" signs on the seats. It's a popular machine!
bob and HansenCTX like this.
Not all those who wander are lost.


And put some dryer sheets under the pillion area of your seat. Ask me why?

Ah, Springer, that's the thing! I had my heart set on a brown one, but when I got there I realized that the one brown one they had for sale wasn't really the Tour model; it was the bagger model with a top box added on. Besides that, it wasn't really "new." It was one of their rental units. After talking about it with wifey a few days ago, we had decided that we were going to go all-in if we were going to get a Gold Wing. She really wanted the heated seat, and I really wanted the other things like the electronic suspension adjustment and the DCT. So... the brown one went off the list pretty much as soon as I saw it.

The other bike that I was kind of thinking of was a Tour, non-DCT model in the fancy white paint. It sure did look purty. But... it was already sold. There was also a black Tour model, not sure of the transmission type, that was buried in an inaccessible stack of sold bikes and I couldn't have gotten to it even if it didn't have a big LEAVE ME ALONE sign on the seat.

Good call on the dryer sheets! I'll stuff a couple up there tomorrow night, when I install the Battery Tender pigtail. Didn't think of it at the dealership, haha.

And it's more than a notion to remove the seat! Not like the key-turn simplicity of the CTX. Gonna miss that, and possibly a few more things, but I'm sure there will be enough positives to make up for it.

HansenCTX likes this.
Not all those who wander are lost.

Join Date: May 2014
Location: Maryland's Eastern Shore, USA
Posts: 895
Mentioned: 64 Post(s)
Tagged: 0 Thread(s)
Quoted: 157 Post(s)
Garage
(Thread Starter)
Quote:
Originally Posted by Russ T View Post
Nice ride Shane ...... Look forward to reading about " how you mastered the DCT" ...
Well, I was totally prepared to dislike the DCT. I really thought I would have to "learn" how not to shift, and that it would just feel "off" somehow. I couldn't have been more wrong. It took about three seconds for me to realize that the DCT was going to be great. The first fifteen minutes of my trip involved me getting lost in a busy urban area because I didn't know how to use the Honda nav yet. (Long story short: Even though the salesman set my "home" position for my actual address, it kept trying to route me back to the dealership. I'll fix that soon enough!) Anyway, in busy traffic on an unfamiliar bike, I didn't have a single issue with the DCT taking care of the shifting. I like to think that I would have been smoother if I were shifting... but in reality, I probably would not have been.

If I'm being 100% honest... the DCT is going to make my life on two wheels easier and I noticed a conspicuous lack of the need for skill to operate it. Also, I cranked the throttle wide open today to pass a truck with the wife on pillion, and it was teeth-jarringly FAST. I mean... ridiculously fast. Ludicrous speed in the blink of an eye. I can't wait to get it into Sport mode, haha!
HansenCTX and Russ T like this.
Not all those who wander are lost.

Join Date: May 2014
Location: Maryland's Eastern Shore, USA
Posts: 895
Mentioned: 64 Post(s)
Tagged: 0 Thread(s)
Quoted: 157 Post(s)
Garage
(Thread Starter)
Here's a pic of the new wheels. It was possibly the Last Perfect Day before cold weather makes its triumphant return. I took the wife for a spin and she was very impressed with the passenger accommodations. She was less impressed with me wanting to test the 0-60 capabilities... mostly because this thing is just really diddly-darn fast.
HansenCTX, bigdaddy2036, ra3boy and 4 others like this.
Not all those who wander are lost.