Join Date: Jul 2019
Location: Missouri
Posts: 122
Mentioned: 7 Post(s)
Tagged: 0 Thread(s)
Quoted: 30 Post(s)
(Thread Starter)
Brake pads
Over all my years with bikes Ive never replaced brake pads. Yesterday I took both wheels off. Had Michelin tires installed, and then put the wheels back on.
Everything went relatively smoothly until I spun the tires while the bike was on the lift. Both the front and rear were scraping. Took it for a short test ride. Pumped the brakes several times. Checked all the bolts and screws for tightness. The scraping was reduced, but still there.
On a recent 4,800 mile trip I found twice, that I was riding with a little pressure on the rear brake pedal. From back surgery years ago and recent back issues, I dont have any feeling in my right leg from the knee down. I didnt feel my foot on the brake.
Im only mentioning that, because it may be the cause of the scraping and not my tire swap. I think they may have been scraping when I got home.
So, instead of going to the dealer to get pads swapped out, Id like to tackle it myself.
It looks like from watching the rear tire install video, that the rear pads can be changed out without removing the rear wheel? Did I see that right? Can the fronts be done that way also?
Any help here appreciated. I should have done brake pads by now, but just never have, and dont know much about them.
10,000 miles on my bike. Half those from the last two weeks.
Jeff

Join Date: Jul 2019
Location: Missouri
Posts: 122
Mentioned: 7 Post(s)
Tagged: 0 Thread(s)
Quoted: 30 Post(s)
(Thread Starter)
FYI, I may go ahead and get brake cleaner and lube. I watched the video on revzilla. Looks like something I can do. Not that hard to pull the calipers.
Thx
Jeff

Join Date: Jan 2014
Location: West Des Moines, IA
Posts: 5,229
Mentioned: 165 Post(s)
Tagged: 3 Thread(s)
Quoted: 836 Post(s)
Garage
Yes, both front and rear brake pads can be swapped out without removing the wheels. I've done that on a few bikes in the past. Not really hard, just need to be sure to insert the spring clips in the right place.
Yet another reason to own the service manual.

It could be that you simply need to spread the caliper halves. Push the outer half of the caliper against the disk and then let go to see if that helps. If not, inspect the pads (last paragraph below) to see if the pads are worn and need to be replaced. Ok, inspect anyway since you're looking at them. If they do then read on

First push or pull the calipers apart as far as you can by hand. The two halves of the caliper slide on pins.
Do NOT open the reservoirs to do this as you would then risk pushing out fluid resulting in dripping on the paint of the plastic.
Should be one pin that goes through the pads at the rear of the pad. Remove the cover screw and then you can remove the pin (threaded).
The new pads will be thicker than the worn pads you remove so after removing the old pads you may need to push the pistons into the caliper even more to fit the new pads.
There is a pad plate, thin metal, that should be placed on the back side of each pad. If the new pads didn't come with it I have been known to simply re-use the old plate.
Make sure the pad spring is properly in the front end of the caliper where the front of the pads will contact. There is a small tab on the pads that fits in specially to hold that end. I always fit the outer pad first, the pad that contacts the pistons. Once the outer pad is in place I fit the inner pad. If the space is still too tight for that pad to fit in I can push on the caliper to compress the pistons a little more into the caliper with the pad I already placed helping to protect the rotor from the pistons and also to provide extra spacing out of the caliper.
Once both pads are in place insert the pad pin through the caliper and both pads. I don't recall the torque spec for that so maybe someone else can post that information. Not too tight or it can break. Some silicone grease should go on the rubber O-ring on the end of the pin. Then replace the pad pin cover screw. (maybe the cover is not a screw but a rubber cover. don't remember now since some bikes have that and some have the screw).

Before you go to all this I would inspect the pads on the bike to verify if they really need replacing. In the photo below you can see both my worn pad that needed to be replaced and a new pad. On the new pad you should be able to see the notch where the pad material meets the backing. This notch is the wear indicator. If the pad is worn down to that notch, as in my worn pad in the photo, then it is time to replace. If you zoom in on the photo you may be able to make out the notch in the worn pad which shows just a tiny wafer thin edge of pad material remaining to expose the top of the notch. If ANY pad in a caliper is worn like that it is time to replace both pads as a pair. You can see this notch by using an inspection mirror (I've used my wife's makeup mirror at times

Don't tell please) and a flashlight. Look at it from the rear end of each caliper in line with the disk. 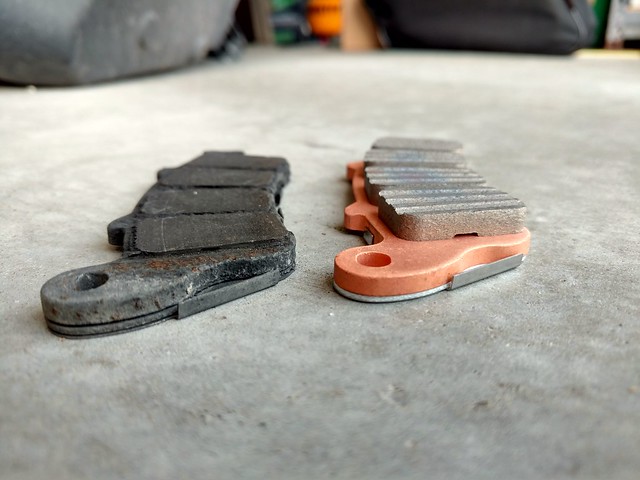 Join Date: Jul 2019
Location: Missouri
Posts: 122
Mentioned: 7 Post(s)
Tagged: 0 Thread(s)
Quoted: 30 Post(s)
(Thread Starter)
Bob,
Great info! Thank you. I looked at the pads yesterday when I took both wheels off. They both seemed to have a lot of brake pad left. I think Ill just take them apart again. Clean them, and reassemble. I do NOT recall a spring that would keep them apart. Not sure about that. I will look more closely. I added the center stand before I got to the wheels, and was starting to get pretty tired by reassembly time.
Thanks again!
Jeff

Join Date: Jul 2019
Location: Missouri
Posts: 122
Mentioned: 7 Post(s)
Tagged: 0 Thread(s)
Quoted: 30 Post(s)
(Thread Starter)
Before I got back into the brakes, I rode over to one of the local Honda dealers. The service manager came out and spun the tires with the bike on the newly installed center stand. Ha.
He said a little scraping sound was normal?? Really.. The tires spun freely and the rotors were not particularly hot after 30 min ride over there. So Im leaving them for now. But I think it wouldnt hurt to swap out pads and clean calipers. Ill try to get to it. I had 4,800 miles of bugs and dirt to clean off. Of course the temp and humidity spike for anything done outdoors.

Join Date: Jul 2019
Location: Missouri
Posts: 122
Mentioned: 7 Post(s)
Tagged: 0 Thread(s)
Quoted: 30 Post(s)
(Thread Starter)
150 mi ride today. Got home. The right front was barely warm. The left front was a little warmer. The rear was warmer still, but not too hot to hold on to.
I guess Ill leave them for now. Maybe a project for this winter to really clean them up.
Thanks!

Join Date: Apr 2016
Location: NYC
Posts: 76
Mentioned: 5 Post(s)
Tagged: 0 Thread(s)
Quoted: 22 Post(s)
Quote:
Originally Posted by MoPops View Post
150 mi ride today. Got home. The right front was barely warm. The left front was a little warmer. The rear was warmer still, but not too hot to hold on to.
I guess I’ll leave them for now. Maybe a project for this winter to really clean them up.
Thanks!
Let's not forget, the left front brake caliper is linked with rear brake as well. I just finished front tire install- left front pads are worn more, 1-2mm closer to wear indicator than right side.
I'm pretty sure i was dragging that rear brake pedal quite a lot...
MoPops likes this.
Last edited by bob; 09-14-2019 at 07:06 PM. Reason: fixed quoted text code
ra3boy is offline
Quote