Joined Jan 16, 2014
·
5,398 Posts
I noticed on the CTX1300, same as on my ST1100, that the saddlebag shell halves can tend to allow loose stuff to fall into the gap between them at the bottom. This can cause a problem with stuff jamming or getting pinched between the shell halves and possibly breaking the hinges on the saddlebag for either bike when closing the bags, especially if it was a hard item. This was something I was always watching for on my ST as well. I never got around to fixing this on the ST but decided to do something to fix it on the CTX.

I had some tub liner material on hand that I used to make some vinyl/rubber washers on a bracket I made for my GW long ago. I also used it on the ST for an insulation cover in the glove box over my fuse panel so I could still use the top half of the glove box. Regular rubber washers were too thick and vinyl only ones were not right either. This stuff is durable and had just the right properties for that project and many other projects over the years. I wanted something weather proof for this project and this stuff is just what I needed. I had originally bought the minimum, 1 ft x 3 ft long from Lowe's or HD back then and now, after this application, only have about a 1 ft square piece left. I cut the strip to length to cover the flat bottom of the saddlebag. Then cut that in half lengthwise. The strip I had was JUST wide enough so if I cut it in half lengthwise it would work for both saddlebags. Someday I might stick them down on the bottom of the inner shell but for now they are just loose in the bottom. Seems to work rather well.

Here is one finished strip: 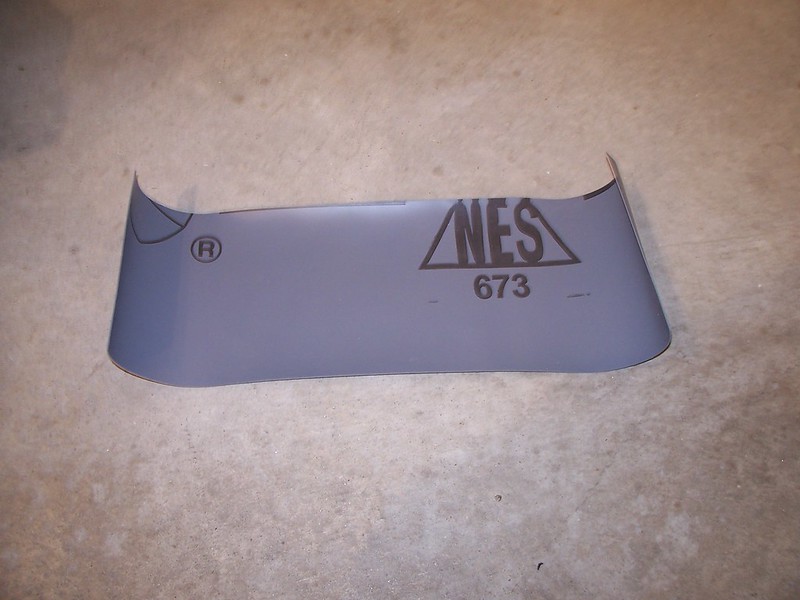 And here is that strip in the bottom of the saddlebag with a bunch of loose stuff; bungee cords, cargo net, some clean rags, and some other stuff: 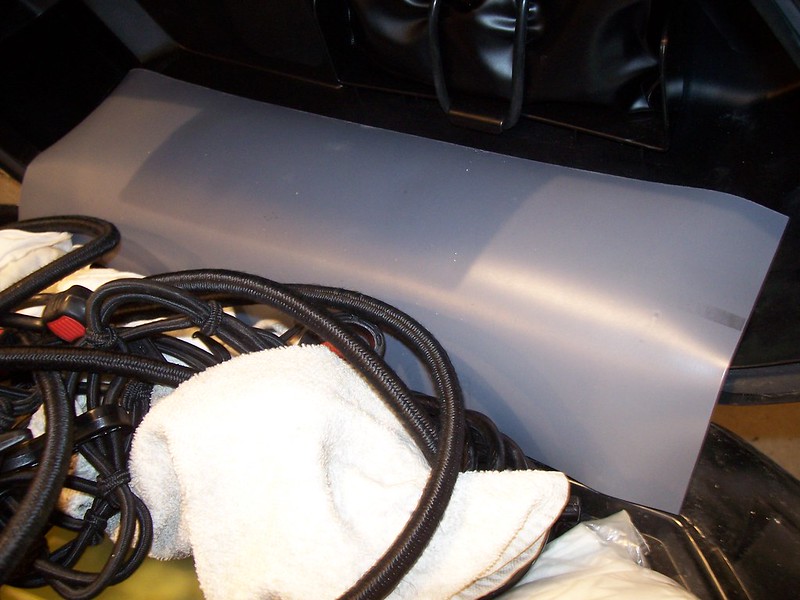 I put it in printed side down because of the curl in the material to keep if from rolling up when there is nothing to hold it down. Oh, and yes, those are cut as simple rectangles. No fancy following of complex shapes there. Yet, they fit rather well I thought.

Now all that loose stuff stays out of the the gap at the hinge.

Joined Oct 21, 2014
·
2,006 Posts
Ok @bob,
I made the liners and they kept things out of the hinge. But I got frustrated when round things, like my pledge, would roll into the door. So I made some modifications. Didn't like 'em. Then I decided to make shelves similar to the others, BUT put them on the bottom.
It works. If I have my bag liners in, it works the same. When they are out and I just have junk in there, it doesn't roll out.
I took a Rubbermaid Roughneck trash can lid, cut off the lips. I then put it inside the bag hanging out a ways, closed the lid so it pushed it in to the right amount and put some small sheet metal screws in it.
I used the Rubbermaid lid because it has small ridges to make the sides stiff.

Joined Jan 16, 2014
·
5,398 Posts
Looks good. Almost all of what I put in the paniers is either in a stuff sack or doesn't need one (like extra gloves) so I haven't had the issue of things rolling out I guess.

Joined Sep 29, 2014
·
324 Posts
I have an idea. How about buying Kydex , then cutting and forming to drop down portion of case. Then you fasten the overlaping portion of Kydex to stationary portion of saddle bag. 4' x 8' sheets of Kydex can be purchased in Dallas or many other big cities. How many people are interested?

Joined Sep 29, 2014
·
324 Posts
Kydex is the material used to make gun holsters or many other things. You just heat it with a heat gun and it forms what ever shape you want. When it cools you have the desired shape like a cubby tray that fits flush to your swinging side saddlebag
The narrator is boring, but you get the idea. Kydex can be purchase in any size.
https://www.youtube.com/watch?v=BUVhAKXm254
1 - 6 of 6 Posts
Join the discussion
Continue with Facebook
Continue with Google
or sign up with email
About this Discussion
5 Replies
3 Participants
Last post:
menosabe Apr 12, 2016
CTX 1300 Forum
A forum community dedicated to Honda CTX1300 motorcycle owners and enthusiasts. Come join the discussion about performance, modifications, classifieds, troubleshooting, reviews, maintenance, and more!
Full Forum Listing
Explore Our Forums
Honda CTX1300 General Discussion Forum Introductions Appearance & Body Engine and Technical Discussion Accessories and Gear
Popular Communities